Eating the first home made Brie

I had no idea that Brie is just large Camembert.  The flavour difference comes from the length of time to develop the flavours and mould in a larger size. Basically I made my standard Camembert recipe and poured the curds into a larger mould.  I also used a salty water wash rather than rubbing salt directly on the skin after removing the cheese from the mould.  I was curious if this would result in a less salty taste than the one I tend to get on my Camembert.  I do think it is less salty, but equally, I did have a little more trouble with blue dots of mould coming through - perhaps the salty water isn't as effective as repelling bacteria?  I'm not sure, but suspect that I will work it out over successive production.

My biggest problem with this cheese though was obtaining a good audience to sample it!  I'd planned to take it to my daughter's birthday party originally - as one of the children is anaphylactic to dairy products I didn't think it was a great idea to have a large cheeseboard at the adult's food table.  I next took it to my regular Tuesday playgroup.  Except I put the cheese in a plastic grocery bag with some crackers and picked up an identical bag filled with marker pens! Two outings down and so I decided to go ahead and open the cheese at home.  I'm glad that I didn't wait any longer - it was perfectly ripe with a tiny bit of ooze in the middle.  Just lovely.

However, I've reached capacity in all systems so after dinner last night a bok choi end waited around on the chopping board for ages while I dithered about its final location!  For some reason, likely a day of child-rearing drudgery, there was some creativity trying to come out!

I've seen people use all kinds of fruit and veges as stamps and thought that the end of the bok choi made a cute shape. A while back I purchased a lot of plain cotton for lining and for art activities. I found the last two paint test pots in the storage cupboard and went to work.

I made about half a metre of print, just enough to make some shorts for my toddler. I feared that the bok choi would disintegrate if I kept going much longer and that the children would complete their work of destroying the lounge.  Test pot paint will keep on fabric after washing provided that you let the paint dry on the material for a couple of days first, then put on warm in the dryer for about half an hour to encourage a strong set.


Posted by Make-do Mum at 4:19 PM No comments: Links to this post


I found two rather generous sized pork hocks on special and I purchased them without too much thought.  After a week in the freezer I realised that something needed to be done with them.  I went to the internet for research purposes and found it rather lacking in great ideas for pock hocks.  I did though have 'pulled pork' on the brain after my husband enjoyed a delicious smoked pulled pork sandwich at the City Market.

I put both hocks into the slow cooker with chicken stock, carrots, onions and garlic.  I seasoned with salt and pepper and also added a teaspoon each of smoked paprika and cumin seed.  At times like this I love slow cookers - I put it on high and just left it to bubble away.

A few hours later I removed one hock and a ladle full of stock.  I poured a cup and a half of pearl barley into the slow cooker with the remaining hock and left it cooking on high for another two hours.  This turned into a lovely dinner for myself and my husband, as well two meals of leftovers.

I shredded the other pork hock, removing most of the skin, and mixed through the stock.  I then added a quarter cup of 'Maharaja Sauce' - a delicious chutney available at Moore Wilsons.  This meat went back in the fridge for dinner the next night (and to give time for the meat to suck up the flavours).  Adding the stock helps to keep the shredded meat from going dry - the chutney (BBQ sauce is more traditional for pulled pork) gives a delicious spicy fruit flavour to the meat.

Last night we used the pulled pork in home made fresh buns with lettuce from the garden, cucumber and a generous tablespoon of vegetable pickle.  It was very, very good.

I was really pleased with these meals.  I paid about $5 for the two hocks, usual price around $12.  So we ate cheaply and deliciously for a couple of nights this week and I'm looking forward to more pulled pork sandwiches over summer.  I'd forgotten how much I like pearl barley as well.  It doesn't need pre-soaking and cooks pretty quickly for a dried grain.

Apart from using hocks to make stock, I'd love to hear from other people what they do with pork hocks.

I've been making a lot of pizza lately.  My toddler loves baking and making pizza dough in the morning helps to get some of the 'need to bake' out of her system, with the advantage that we can all pretty much have whatever flavour pizza we feel like later in the day.

Last week I got out the mixer and, at the same time, decided to prepare some beetroot relish.  Grating three beetroot produces a lot of purple staining splashes and I got a drop in the dough.  My toddler thought that this was hilarious and asked for more.  So I squeezed out the juice from the next few handfuls and added it to the dough.

I'm not going to pretend that it is the most palatable colour for adults... 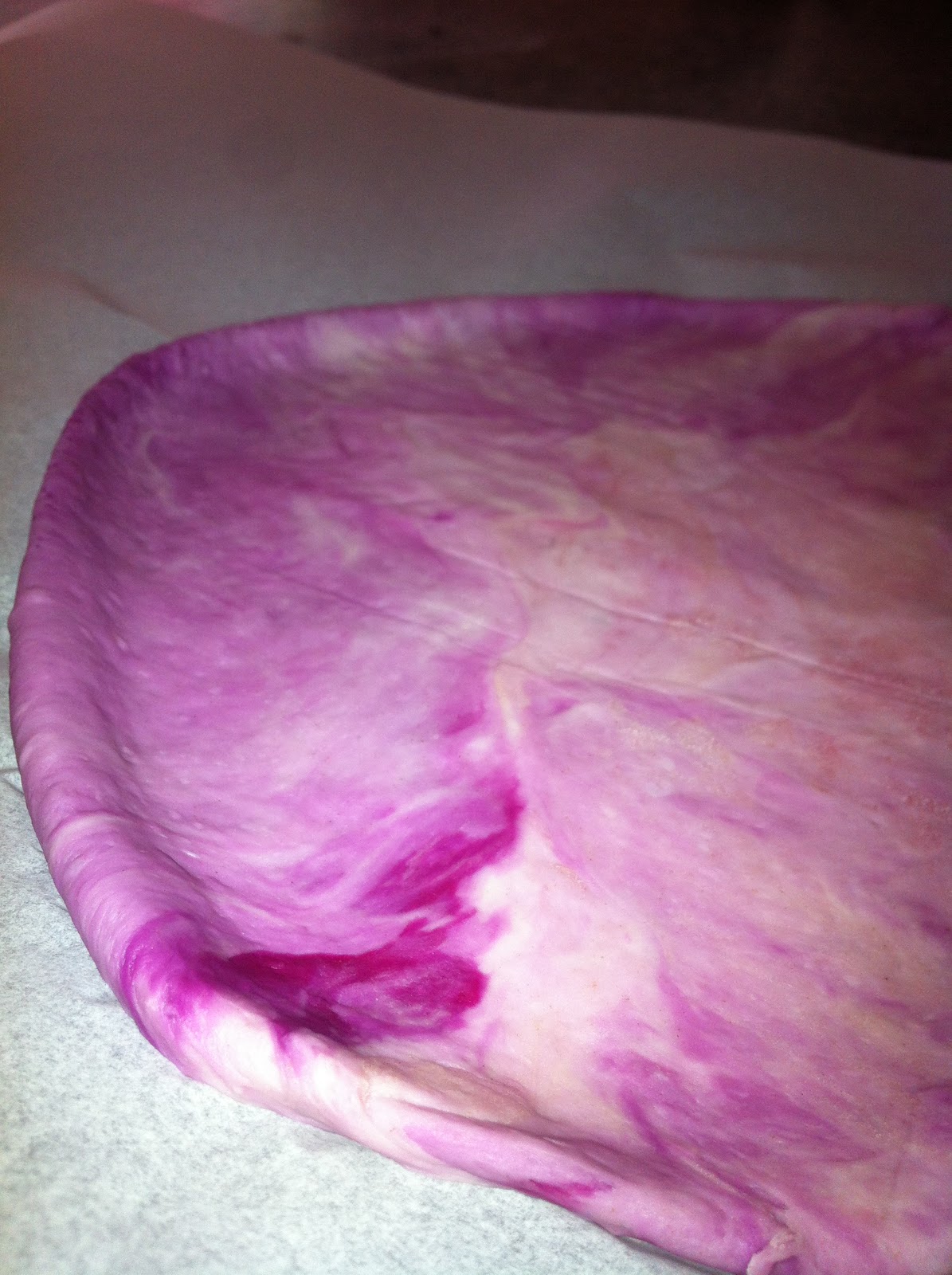 ...and in fact the colour would have been more even if I'd added it to the liquid at the start.  But I feel that the swirls are quite attractive! 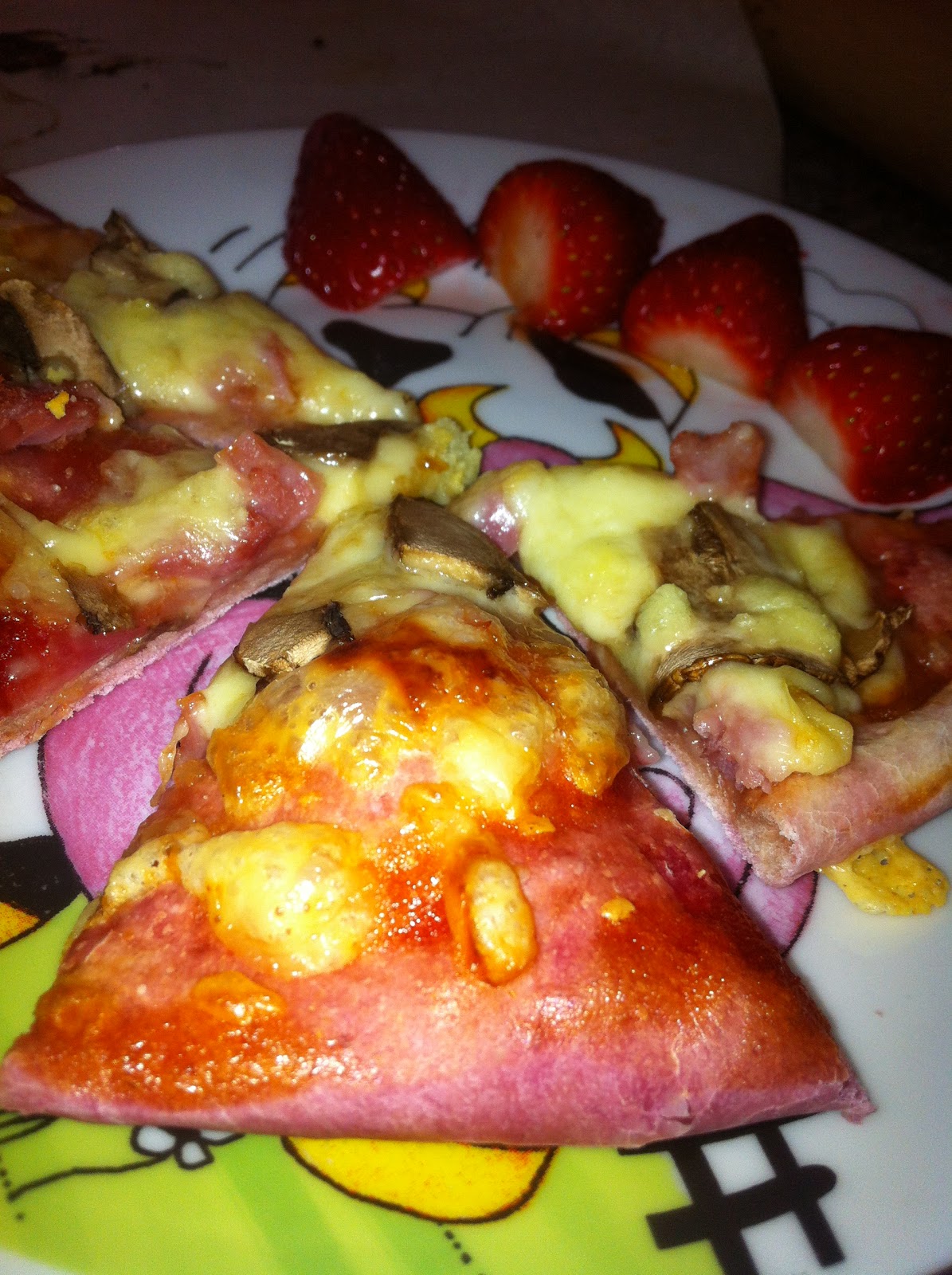 When baked the purple turned rather pink.  It was a huge hit with both my five year old and two year old.  I'm not going to pretend that there were any particular health benefit - I doubt that there is a huge amount of extra nutrition from a tablespoon of beetroot juice.  There was absolutely no taste difference.

My oldest daughter is now six.  In my head she is still a baby, but I am rudely confronted by the reality that she is becoming quite an autonomous little human and her birthday confirmed this.

We had a talk about inclusive birthday themes and came up with a weather theme.  Rainbows were a sub-theme.  Because the party was over lunchtime I really wanted to make a lot of food, and not all of it junk food.  The final menu was:

The major attraction was the cake.  The children were all very impressed by the size of it and there were a few gasps when my husband cut the cake and they saw what was inside!  This was a very popular cake and so easy. I have three cake tins the same size.  I made one batch of cake mix and divided it between three pans.  I then added the colouring to each pan.  I used quite a moist cake mixture, but given that you need to ice between the layers a dry cake would also be suitable.

My daughter is a self-proclaimed scientist and a bit of a purist when it comes to the rainbow.  I had to explain that I could not find purple gel for a seventh layer.  She thought about this quite seriously and conceded that six layers would be fine! 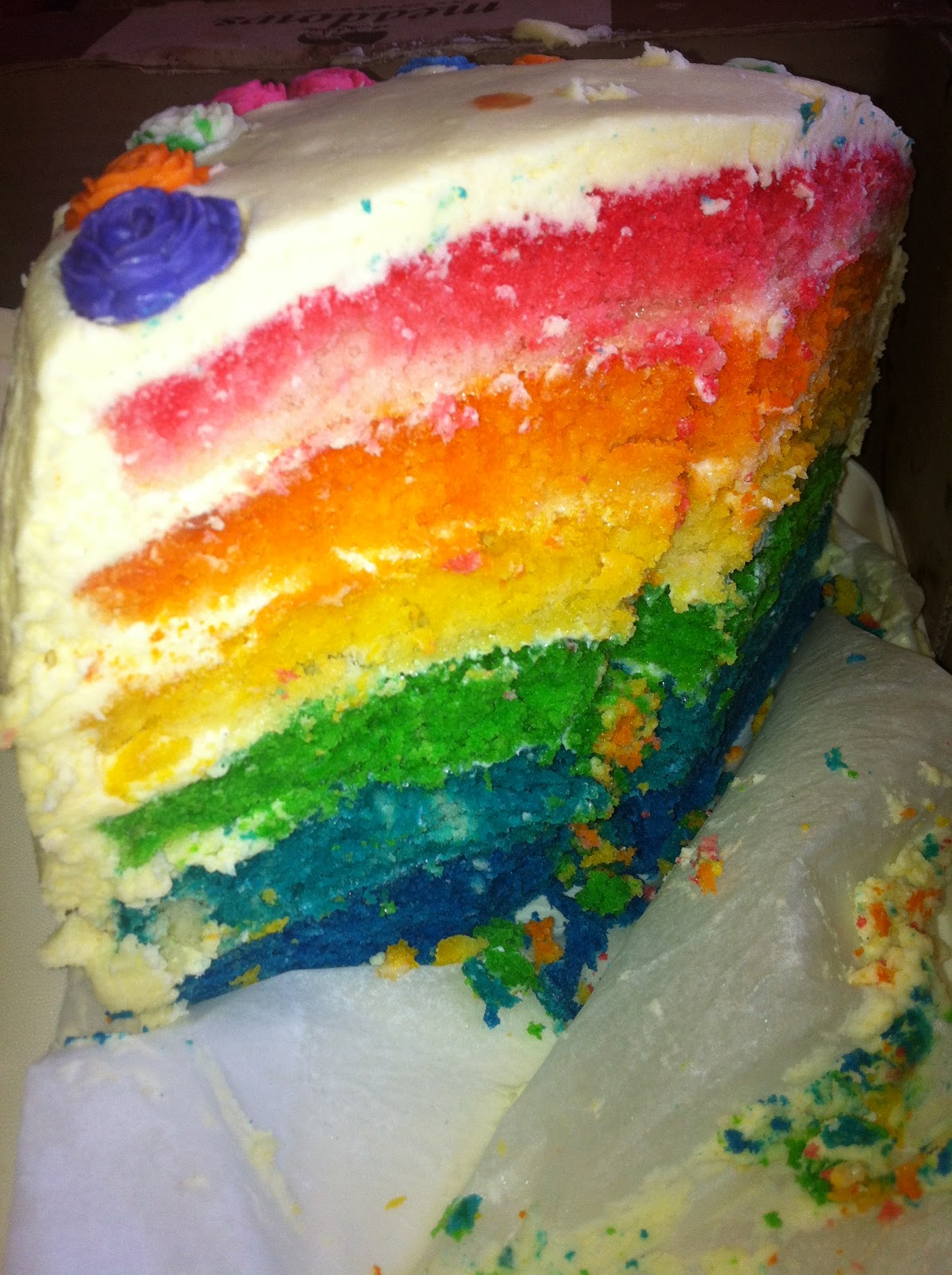 Like most birthdays the day passed in a blur.  I was worried that the party would be too long, and we would have lots of bored children.  In the end we had a few hungry children who had left the sky show early and could see the food.   I let them start eating a couple of minutes before the other children came back.

I decided not to go with the hell and torment of pass the parcel.  I had an extra craft activity available (colouring in masks) and had brought along equipment for an egg and spoon race.  I tried playing Chinese whispers with the children waiting out the sky show - it was hilarious.  Try it with five year olds - you wont regret it. I was very surprised to see that we had ten more minutes of party time left after singing 'Happy Birthday' (or the 'to you' song as my toddler calls it) and cutting of the cake.  The children all ran around the exhibits at the highest noise levels possible before disappearing with their respective parents.  Silence, then the long walk back to the car and home.
Posted by Make-do Mum at 12:59 PM No comments: Links to this post