I've been working very hard on making my vegetable garden productive over the last few months and have been rewarded this summer with lots of courgettes, heritage peas, lettuce, jersey bennie potatoes and tomatoes.  It is very satisfying sitting down for a meal that you grew.

But, getting something for nothing is also satisfying.

I received three kilogrammes of plums which kicked off the preserving.  We ate a few, then I rapidly made plum jam (I think plum jam is my all-time favourite jam) and then plum sauce using the Edmond's recipe.  Two large jars of jam, three bottles of sauce.  All good. 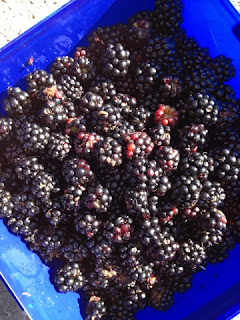 Then it occurred to me that it was probably blackberry time.  My husband enjoyed fruit picking as a child and so I suggested that we go and try for some blackberries. Our first expedition, to a local river, involved my youngest throwing stones in the river while we collected berries.  It took quite awhile, and produced two small jars of jam.  We returned without the toddler and had better success....but felt that it was a lot of work for little reward.  Then we lucked upon a roadside batch.  I yelled 'bezzies' (not that mature but that it what the youngest calls berries and it has caught on) and we stopped.  Since we have young children we always have lunchboxes of snacks with us and we rapidly filled the lunchboxes.  Blackberry and Apple jelly was the result (four medium sized jars).


We then got serious.  More trips, more berries.  The last two nights my husband and I have taken turns going out for some light 'bezzying.' I estimate that we have picked about thirty-five cups worth of berries from a variety of locations (I am good at finding random patches of berries while out driving).  Blackberry vinegar, Blackberry relish, Blackberry ice-cream and a lot more jam came next.  We have about four cups of frozen berries for general dessert use later in the year. 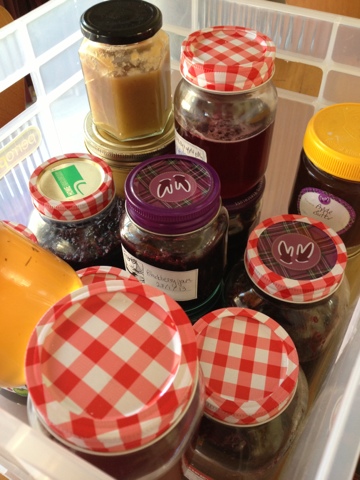 There is a critical oversupply of preserves in our household.  I feel strongly though that since they now live in our storage shed (three shelves being seen to be an indecent amount of preserve storage in the lounge) that it counts towards our emergency food supplies.  I'll also be giving some away as gifts.

Blackberry season will soon be over and attention will return to my garden.  I'm keeping track of expenditure and production this year because I don't want to discover that I've produced a  $64 tomato.

All the blackberry recipes in one place!

In a clean jar put clean washed blackberries and our over vinegar to just cover.  After three days strain the mixture through a muslin into a sterilised bottle.  You can save the vinegared berries for the relish below.

I followed the River Cottage recipe with a couple of changes.  I didn't use powdered mace because mace is hard to find (I do know that you can find it at Moore Wilson's).  Also after cooking I didn't strain the mixture through a sieve to remove the seeds.  It is impossible to sieve for seeds when the mixture contains onions and apples.  If you don't want the seeds you can can cook the berries first until pulpy then sieve and cook with the other ingredients.  You may wish to retain the apple peel and cores for Apple and Blackberry jelly.

Blackberry jam is quick and easy to make. Cook your blackberries on a low heat with a very small amount of water until the berries begin to bleed juice.  Once there is a lot of juice coming out increase the heat until the berries are boiling.  You can choose to squish the berries with a potato masher at this point if you wish.  You may also choose at this point to let the berries cool and push the mixture through a sieve to get rid of the seeds.  I don't bother.  Once the berries have boiled for a couple of minutes add some kind of acid.  For a large amount of berries (more than four cups) I'll add one teaspoon of citric acid.  For a small amount I'll add half a teaspoon.  The exact amount isn't too important and doesn't impact on taste.  Add the sugar.  I used one cup of sugar for each cup of boiled berry slush.  Boil together for about four or five minutes.  Bottle in sterilised jars.  This jam sets a little more over time so if I doesn't look well set straight away it should look a lot better the next day.

Grab some sour/ tart apples (like Granny Smiths) and roughly chop.  Put all parts of the apple (including pips) into a pot with a little water.  Simmer the apples until they start looking soft.  Add the berries and cook further until the berries are pulpy.  Give the mix a good squish with the potato masher and cook a little bit longer. Allow to cool slightly then drain through a jelly bag.  Measure the mixture and for every cup of juice allow 3/4 cup of caster sugar.  Bring juice and sugar to the boil.  Boil for 10-15mins or until setting point is reached.  Bottle in sterilised jars.

The cool thing about this recipe is that you don't exact amounts of berries or apples - the measuring comes once you have the juice.  If I have hardly any berries then I will be extra generous with the apples.  If I have heaps of berries then I will dial back the apples.  The two most recent batches I made highlight this beautifully:  one jar of crimson clear jelly, the other the colour of red wine.

Blackberry cordial is straightforward to make:  the first batch I made is perfect as a hot drink in the evenings.  Without the spices it would make a refreshing summer drink on a hot day.  Your choice!  My version is adapted from this one:

Grab as many berries as you can get your hands on and put them in a pot with enough water to nearly cover them.  Add a cinnamon stick. Warm to a simmer.  Let the berries get very pulpy and soft (approx 20 mins). You want to squish all the juice out of the berries so squish them down with a potato masher.

Remove from the heat and strain through a jelly bag. While still warm, for every four cups of liquid add a cup of brown sugar and stir until dissolved.  Bottle in a sterilised bottle or jar.

If you are making the drink for refreshing cordial (instead of a hot winter drink) I'd omit the cinnamon.

My first batch of cordial wasn't sweet enough for the rest of the family and they mostly didn't like the cinnamon I added above.  I had another go at making cordial.  I'm not really sure that it is a classic cordial recipe, but it works for us!  I've made this cordial mostly without any kind of measurement, so play around with it a little and see what you like!

While the sugar syrup is still warm (but not boiling) add the berries.  Leave to infuse for a few hours, or overnight.  Pour the mixture through a sieve, squishing the berries through.  Using a piece of muslin or cheesecloth, strain into a sterilised bottle.

This is really refreshing diluted 1:4.  The used berries can be either discarded or eaten with ice cream or yoghurt.


Wow!  A whole month without posting.  I guess I took a much needed holiday!  I had a lot of blog posts planned and drafted but have lost them with the very sad loss of my much beloved iPhone.  You will soon see posts on my first sausage making attempts, more cheese making (halloumi is my new favourite) and a very Star Wars Easter.

A friend posted this link on Facebook and I had to share it....I am for anything easier.  The link leads to a lot of small tricks to make your life a little easier.  I for one will be using a pants clothes hanger to hold my recipe books open (swinging from my over head cupboards) and will be making a few cold packs by using soaking old sponges in water, containing them in a zip lock bag and keeping them in the freezer.  Great ideas.


Posted by Make-do Mum at 2:50 PM No comments: Links to this post