I made nutella play dough the other day. It smells heavenly and was very popular with the girls and their friends.

Tonight I was mass producing lasagna so was making pasta. I really enjoy making pasta, because it is pretty easy with a bread maker/ mixer and a pasta roller.

Making pasta is very similar to playing with play dough. Both girls congregated to the kitchen, competing for the stepladder. They took turns pushing dough through the roller and generally playing with the leftover dough. I was impressed with the two year old's arm strength!

The five year old was determined to make spaghetti and linguine and used those functions on the roller. Even though dinner was long finished I offered to boil up some water so she could cook her noodles (she couldn't wait for the noodles to dry)!

I put a thermometer in the pot so she could learn about temperature and boiling. She got very excited as the temperature rose and then sprinkled the pasta into the water. She doesn't really like tomato based sauces so I tried something I'd heard about in a book about French food and added a little butter and cheese. She was very happy :) 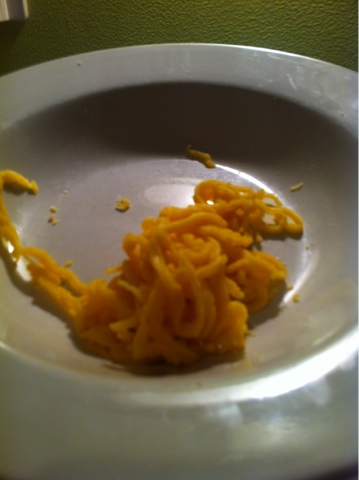 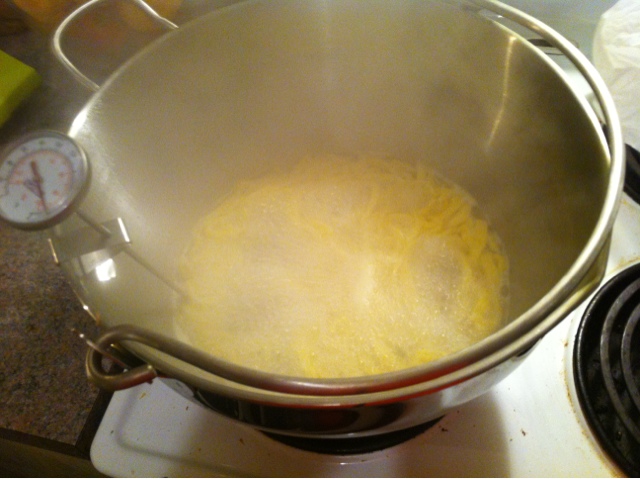 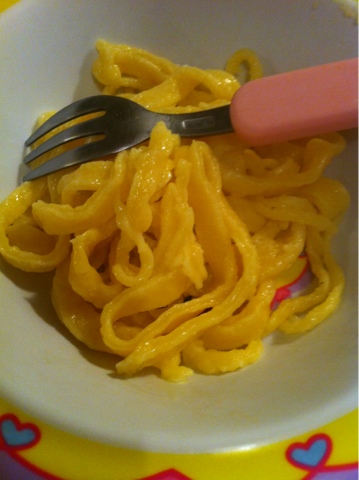 Cooking with the baby

The baby is 23 months old but will I suspect be called the baby until we either have another or she is old enough to tell us to stop calling her one.

She loves copying what we do and her favourite thing to copy at the moment is cooking! I used to do the same thing with her big sister. I'm still impressed at how quickly they learn recipes.

The baby loves eggs and knows that we will normally get one out for real baking. Three weeks ago I discovered four smashed eggs on the floor. The baby had dragged a chair to the bench, wiggled on to the bench, dropped four eggs and then left. I was speechless.

Today the baby is fake cooking. She is using the leftover flour from crumbling katsudon and mixing it. I have provided some porridge oats and water.

This will last forty minutes or so. Meanwhile I will tidy the other end of the kitchen. When finished she typically gets the brush and shovel, as well as a tea towel to clean up. It is very sweet. 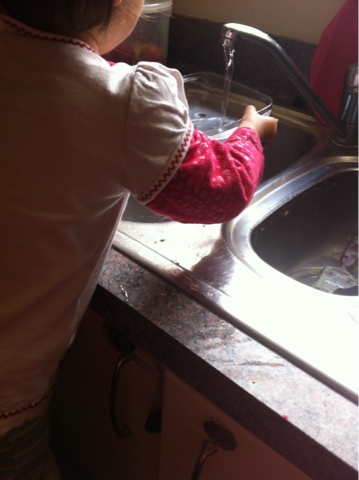 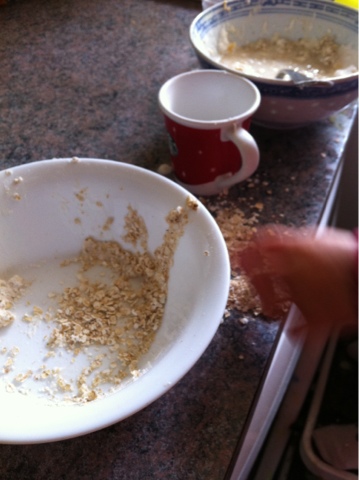 Posted by Make-do Mum at 11:40 AM No comments: Links to this post

I've been a bit uninspired blog-wise lately.  Cooking mainly for young children day- in and day-out is exhausting.  My oldest daughter is going through a bit of a fussy phase while my youngest continues the infuriating toddler eat-heaps-one-day and then hardly anything the next.

I'm also at the end of two weeks of travel, sickness and injury within the family.  My husband and I have taken turns sleeping in shifts all weekend and so a little cooking mojo came back.

I attended Handmade 2012 a few weekends back and Lynda Hallinan of NZ Gardner fame brought along her ginger beer bug and sent home attendees of her masterclass with their own bug starter in a jar.  I bottled my first batch at the weekend and hopefully I will have a good news story about it later in the week.  This is my second batch of the bug and it is very, very active.

At the same time as I was making the bug I was waiting for my apple and mint jelly to set.  I seem to have some kind of jam making impairment at the moment and end up having to re-boil all my jam.  I've even taken to using the temperature method (boiling to 102C).  I have a few jam making friend experts so I'm hoping to pick their brains. Apple and mint jelly made with green apples though is a very easy jam to make - all the pectin in the apples helps a lot!
Since I was up late I decided to get some bread baking for the next morning.  I tried a new recipe from the newer version of Alison and Simon Holst's bread making book.  I was intrigued because it used two kinds of yeast.  Even though it was the same yeast as in the very frothy bug I found that there was not much of a good rise in this bread.  I felt that it was a little doughy and way too yeasty tasting.  However, I'm sure it was something to do with the process not the recipe (I have never yet found a problem with an Alison Holst recipe).  I love how mysterious bread making can be.
I also decided to try something a bit different and come up with something to do with a bag of persimmons that had gone soft.  There are not that many options out there, even with the whole of the internet as a resource.  I decided to go with an apple and persimmon butter.  I cooked them on low over night in the slow cooker, then squished through a sieve and boiled down on the stove top.  The final colour is a deep blood red/orange.  It tastes nice, but is quite sweet.  I don't like it as much as plain apple butter.﻿
Posted by Make-do Mum at 8:23 PM 1 comment: Links to this post