Earlier this year I became a tad garden crazed.  It helped having a single tomato plant produce 666 individual cherry tomatoes.  I kept a tally of everything I harvested and the long warm autumn encouraged the mass planting of seeds.  I was determined to produce a lot of winter vegetables.

I got sick so at the end of May I planted the biggest seedlings in the garden and left the rest to die.  I planted the garlic very early and figured a few extra weeks couldn't hurt. Three months passed.  The first thing I checked when I got home from the hospital was the state of the garden.  The big storm in June was not kind to many of my plants in the front garden.  There was growth, but it was very small.  As I write most of the stuff that went in my garden in May is only getting close to producing anything now.  The exceptions were bok choi and Chinese cabbage - two vegetables I was specifically told not to eat on discharge!  Ironic.

I've been a bit bored recuperating.  I want to do stuff, but don't have the energy.  I do though have the energy for elaborate garden planning.  I'm on my third draft.  I've also been planting a few seeds.  By a few I mean:
And since it is too cold outside for most of these seeds I am gardening inside.  My bathroom (very warm room) and the spare room have become a nursery.


I'm sure that there will be space for everything (finger's crossed).

I am determined not to plant things out too late this year - a fatal error in previous years.  When I feel sure that we have passed the stage where frosts will come then I will be cheerfully filling in the garden.  My aim is to have one whole week this summer where I do not have to buy any veges or fruit.  The plum tree that I bought for $5 earlier this year is covered in blossom and my blackberry and raspberry canes are looking promising.  We have a huge amount of strawberry plants and this should be the year when we finally get some feijoas. I think a week without buying fruit or vegetables is a real possibility.
Posted by Make-do Mum at 11:50 AM 3 comments: Links to this post 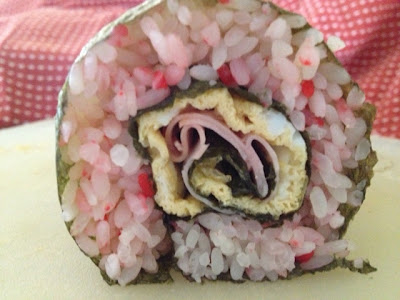 Isn't this pretty?  Well, pretty to a six year old at least. My oldest loves eating sushi, and her favourite is salmon nigiri.  But making fresh salmon nigiri everyday for her lunch is unlikely to happen, mainly because no one else wants to eat quite as much salmon as she does.  This sushi flower though has ingredients that we do generally have: ham and egg.

Very coincidentally, a Japanese friend and his family popped over to visit while I was making these 'flowers.'  I was worried about adding too much liquid to the finished rice as I didn't want it to be too gluggy. He said that it was typical to use a little less liquid when making Japanese rice for sushi to allow for the sushi vinegar that you put in at the end.  I'll remember this tip for next time.

(this recipe assumes that you know how to roll sushi - you should watch a tutorial on You tube if you are unsure).

Mix up two eggs with a teaspoon of soy sauce and spread thinly over a frying pan.  When cooked through, remove from heat and cool on a tablecloth. Take a sheet of nori and place on a sushi mat.  Place the omelette in the centre.  You can either cover the omelette with thin slices of ham (as I did) or tear ham into small pieces and place randomly over the omelette (this gives a slightly different effect when rolling).  If you want to use pickled ginger as well as or in place of the omelette you can add it here.  Tightly roll this mixture and place to one side.

Add the sushi vinegar (with the food colouring) to prepared rice (look at the back of the sushi vinegar bottle to determine how much is needed for your amount of rice).  Stir through thoroughly. Spread evenly over the sheet of nori.  Place the egg and ham nori roll on top and roll together.  Use a sharp knife to cut into slices. 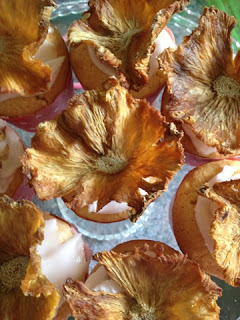 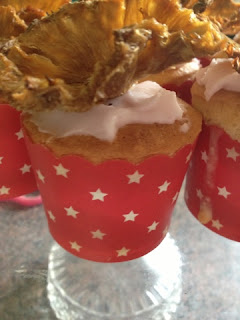 Take a look at these beautiful pineapple flowers.  I've never eaten dried pineapple before but, wow, it is delicious.  This recipe, for pineapple,coconut and lime cupcakes caught my eye while I was reviewing  'Alice in Bakingland' by Alice Arndell.  It is a beautiful book to just look through, and these pineapple flowers grabbed my attention.  This batch was a trial for my husband's workplace.  During my recent illness they were very kind, giving my husband heaps of time off, and sending home a lot of meals for the freezer.  Unfortunately, the batch didn't quite make it there! Visitors and time passing meant that they were gratefully received at home!  I'll make another batch, I swear!
Posted by Make-do Mum at 1:58 PM No comments: Links to this post