My determination that we would be self sufficient with vegetables this summer means that we have a lot of vegetables available to eat.  I'm not sure we got to self sufficiency - but we got close.  The money saved on buying vegetables (and we did go five or six days at a time without buying vegetables) was spent on summer stone fruit!  While my boysenberries, strawberries and blackberries have all performed well, they do not keep us in fruit.

I cooked these courgette and scallopini in a herbed mustard vinaigrette.  I just put the lid on top and baked them in the oven.  The reason I called this recipe 'curcubit surprise' is that I had no idea I was growing scallopini, let alone white ones.  I was checking on my mad pumpkin patch when I realised that the group of baby pumpkins were in fact scallopini.  Alas, because they had reached a very large size I think that the plant has produced only one crop and then died.  Still, it was good for a few days of odd shaped vegetables.  I think I also prefer the American name for scallopini - patty pan squash. 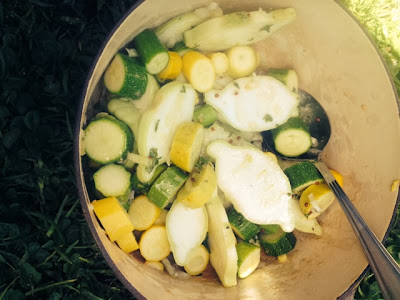 Last summer I had two courgette plants and was annoyed that I had no glut of courgettes.  I thought that the plants were slightly unproductive due to being grown in containers.  This year I have five courgette plants, two green and three yellow.  They came from a mixed pack.  The yellow courgettes seem to grow more slowly than the green ones, and produce nowhere near as much.  Still no glut.  I can't work out though if we just eat a lot of courgettes?  Since our stand by meal option is usually some kind of stir fry, we can easily grow through two or three in each stir fry, a few times a week.  I was really hoping to freeze a lot for winter, and to have so many that I would be forced to make things like chocolate zucchini cake or beg friends to take them off our hands.

Another curcubit in the mixture above is crookneck squash.  I planted many of these seeds and got two small plants.  Mine didn't get very big, and I only got maybe ten off both plants.  If they get very big they turn into squash with a hard, warty skin.  You then have to bake them, as the skin isn't soft enough to eat.  Only one of mine made it to this size, mainly because I gave up hope that the plant would produce anything.  I can't work out if they were just in a bad location, or if they just aren't big producers.  I'll give them another year!

I have learnt a good lesson - one which I suspect most gardeners know through common sense.  Don't through the potting mix from your non-germinated pumpkin seed wantonly through the garden.  As of this evening it appears that I will have thirteen pumpkins.  I only deliberately planted three plants, four have just sprung up and one I swear was supposed to be a cucumber plant is actually a buttercup pumpkin plant. Sigh. Still, the pansies that grew from the same method are very cheerful.

I did later find the cucumber plant - I planted it in the communal vegetable garden I share with my neighbours.  I nearly cried I was so thrilled to see a cucumber and not another blinking pumpkin.  It was delicious.  The second one is on my kitchen bench, and I will probably eat it this evening rather than subjecting it to refrigeration.

Last summer I went crazy with peas: snow peas, sno peas, capucijner peas and garden peas.  This year belonged to the curcubit.  I think next summer will be beans.