Dumplings may actually be the world's best food.  Prior to my first trip to Japan I'd had wontons - friend pastry with a dot or two of mince on the inside smothered in violently pink sauce, but not proper dumplings.  I tried to find gyoza here in NZ on my return, but it would be a number of years before I would live in a city that could meet my dumpling needs.  Proper Chinese dumplings, (can be called wontons) are so yummy.  My husband introduced me to wonton noodle soup and my life changed.  There are few better meals than homemade wontons with homemade stock, some spring onions and your favourite noodle of the day.

Before having children it was a regular sight for visitors to our home to happen on wonton days.  My husband would get a nice piece of pork, dice it using the cleaver, add some spring onion, marinade then start a wonton procession line.  We would freeze them in groups of six.  We liked to joke about calling them fast food - once you defrosted the stock, got it boiling then cooked the dumplings, noodles and veges it would be at least half an hour before your dinner was ready - but what a dinner.

So there are boiled wontons.  Easy enough to make - get some wonton sheets from the freezer at an Asian grocer, dice up pork (better texture than mince) add some spring onions and maybe some Chinese cabbage then marinate: light soy, sesame oil and oyster sauce is a pretty standard marinade used by my husband.
It is fairly easy to find folding instructions on the internet.  My daughter found it easiest to fold into triangles, then fold in each side to the middle.  Whatever works.  You will need some glue (cornflour mixed with a little water) to help the edges to stick.  Boil up fresh (don't keep in the fridge - they quickly dry out) or cook from frozen (do not defrost). 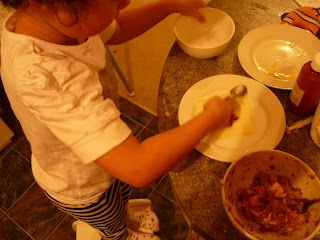 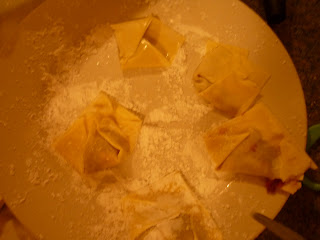 My favourite way to have dumplings is gyoza.  This is almost a mythical form of cooking, and one that I lose faith in every time.  Still it works, it is just that in my head it shouldn't!  You can steam and shallow fry the dumplings at the same time.  Lightly coat a fry pan in oil.  I tend to use an oil spray, then a couple of teaspoons of peanut oil.  Heat (just before high), then put in the dumplings.  Immediately add half a cup (no more) of water and put the lid on.  keep the temperature quite high - say 7/8-10 on your stovetop.  You will be convinced that the dumplings will burn and stick.  Keep boiling away until the water has disappeared.  Remove lid and turn down to half/ average heat.  Test a dumpling.  If it easily flips over, it is ready to flip.  If it doesn't, then they are not ready.  Cook for another couple of minutes and test again.  I always think that they are going to burn and scrape one off only to notice that they are not cooked.  The dumplings need to dry out after the steaming/ boiling and let the oil and heat mix to put a nice colour on the bottom of the dumplings.  Flip over, cook for a couple of minutes (will be heaps faster than the first side) and serve with a dipping sauce.  Yum.  Leftover dumplings cooked this way are a favourite in my daughter's lunchbox.

You can of course just shallow fry, or even deep fry.  If your dumplings are very thick, ensure that the filling is well cooked.

Finally, you can do a lot of other things with wonton pastry.  I'd recently seen a canape idea where wonton skins were oven baked and then filled with salad ingredients.  I tried it and yes, they do make good cups.  Just be careful to space them out (so that they don't touch the other ones) and to spread them out prior to cooking - if the edges are to close together it will be impossible to stuff them. 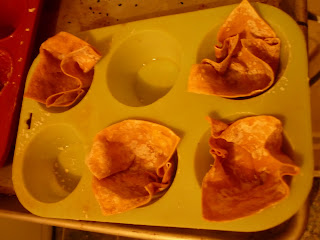